I remember in high school (proud graduate class of ’79 Buena High School in Sierra Vista, AZ) my economics teacher Joe Bob Cole told us that the person or company that figured out how to make solar power economical would be rich. Fast forward 38 years (I just felt really old typing that) and guess what? One of the biggest areas of innovation is…..solar power.

The technology is just now becoming economical. That does not mean there haven’t been some pretty cool developments.  In 2014, I wrote a narrative about the future of solar roads and solar parking lots (Click here to read).  Three years later and the future is now. A short solar panel road was just unveiled in Normandy, France. Below is an article about the project.

Here is the current status of this technology:

In short, the future is here, but there is still some way to go before it is a viable option.  How will this road handle heavy trucks, weather, and usage? Will the power generation remain constant? These are some of the questions that will get answered over the next few years.  As usual, I will be following this trend and will keep you posted. 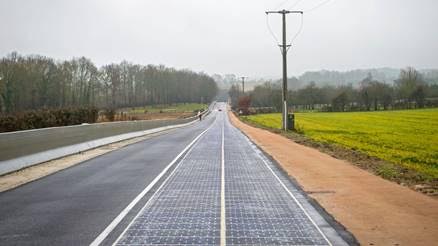 The village of Tourouvre-au-Perche in Normandy, France, is taking solar panelling from the roof to the street. The town says it’s just unveiled the world’s first solar panel road.The 1 kilometre (0.6 mile) route, covered by 2,800 square metres of electricity-generating panels, was declared open on Thursday by the country’s ecology minister, Ségolène Royal.

The panels have been covered with a protective resin that consists of fine sheets of silicon to help withstand the 2,000 motorists which use the road, while ensuring there is good grip between tyres and the roadway.

Officials will see if the technology, called Wattway, can provide enough energy to power street lighting in the town of 3,400 residents over the next two years, according to The Guardian.

It’s not a new idea however. A similar project in the Amsterdam, The Netherlands opened back in 2014, but on a cycle path instead of a regular road.

If the trial proves successful, Royal wants to see the panels installed in one out of every 1,000 kilometres (621 miles) of road in the country.

France currently has a total of 1 million kilometres (621,000 miles) of road. 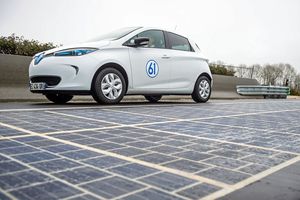 But the technology comes with a mighty price tag: The stretch of road cost 5 million Euros (US$5.2 million) to build, leaving some experts questioning the project’s value.“It’s without doubt a technical advance, but in order to develop renewables there are other priorities than a gadget of which we are more certain that it’s very expensive than the fact it works,” Marc Jedliczka, vice-president of Network for Energetic Transition (CLER), told Le Monde.

Colas, the road’s manufacturer, is hoping to reduce the cost of production of the panels.

It’s also currently working on a hundred small solar experiments, half in France and half from abroad.