Office leasing is off to a good start in 2016.  Here in Metro Phoenix, the market saw 641,000 square feet (SF) of net absorption (office jobs added) recorded in the first quarter.  This means Metro Phoenix is on track to absorb approximately 2.5 million SF for the year. That would mean another year of consistent, average net absorption, since 2.5 million SF matches our 25 year average.

However, based on current activity early in the second quarter, I wouldn’t be surprised if we have another outstanding year of job growth like last year (3.4 million SF absorbed).  While there are still some dead spots within the market, activity is mostly up across the Greater Phoenix region.  For tenants I represent, there is often activity on spaces under consideration, and they no longer have months to make a decision.  I’m also seeing increased tour volume at the buildings I lease across the Valley.  Vacancy, at 19.4%, has remained virtually unchanged from Q4 2015 due to the 1.1 million SF of new construction that delivered this quarter.  A 19.4% vacancy seems very high, especially when compared to other major markets across the United States.  For Metro Phoenix, it just means that we’re getting closer to equilibrium levels for vacancy of 15-17%.  At these figures, it’s neither a tenant’s nor a landlord’s market.

Below is a link to our Lee & Associates 1st Quarter Report and as usual, I’ve included my top takeaways below:

1.       Numbers show that Tempe and South Scottsdale remain the two most desirable places for offices.  Tempe led the way with the most net absorption with 256,000 SF while South Scottsdale boasts the lowest vacancy of any major submarket at 11%.
2.       The Superstition Corridor had the second highest net absorption in Q1.  With lease rates heating up in choice submarkets like Tempe, it makes sense that tenants would be priced out and looking for less expensive buildings along the US 60.  It also speaks to the strong demographics of the East Valley.
3.       The top lease in the market was CVS who took all of Four Gateway (444 N. 44th St., Phoenix), a very nice 140,000 SF block of space formerly occupied by State Farm.  Negotiations started taking place before State Farm’s lease expired at the building.  The large blocks of space that State Farm will vacate in the 44th Street and Tempe submarkets may not have such an adverse effect on vacancy as everyone thinks.

If you have a question on your lease, want to find out how much your building is worth, or just want to talk about the market, please give me a call. 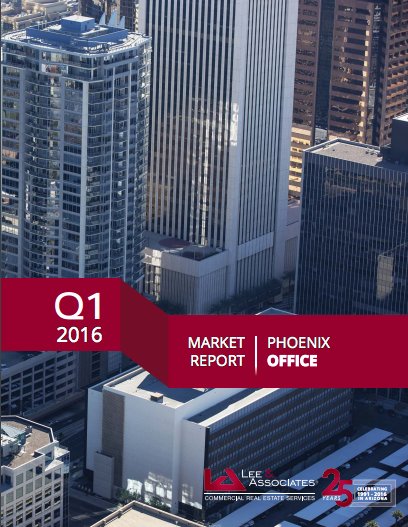