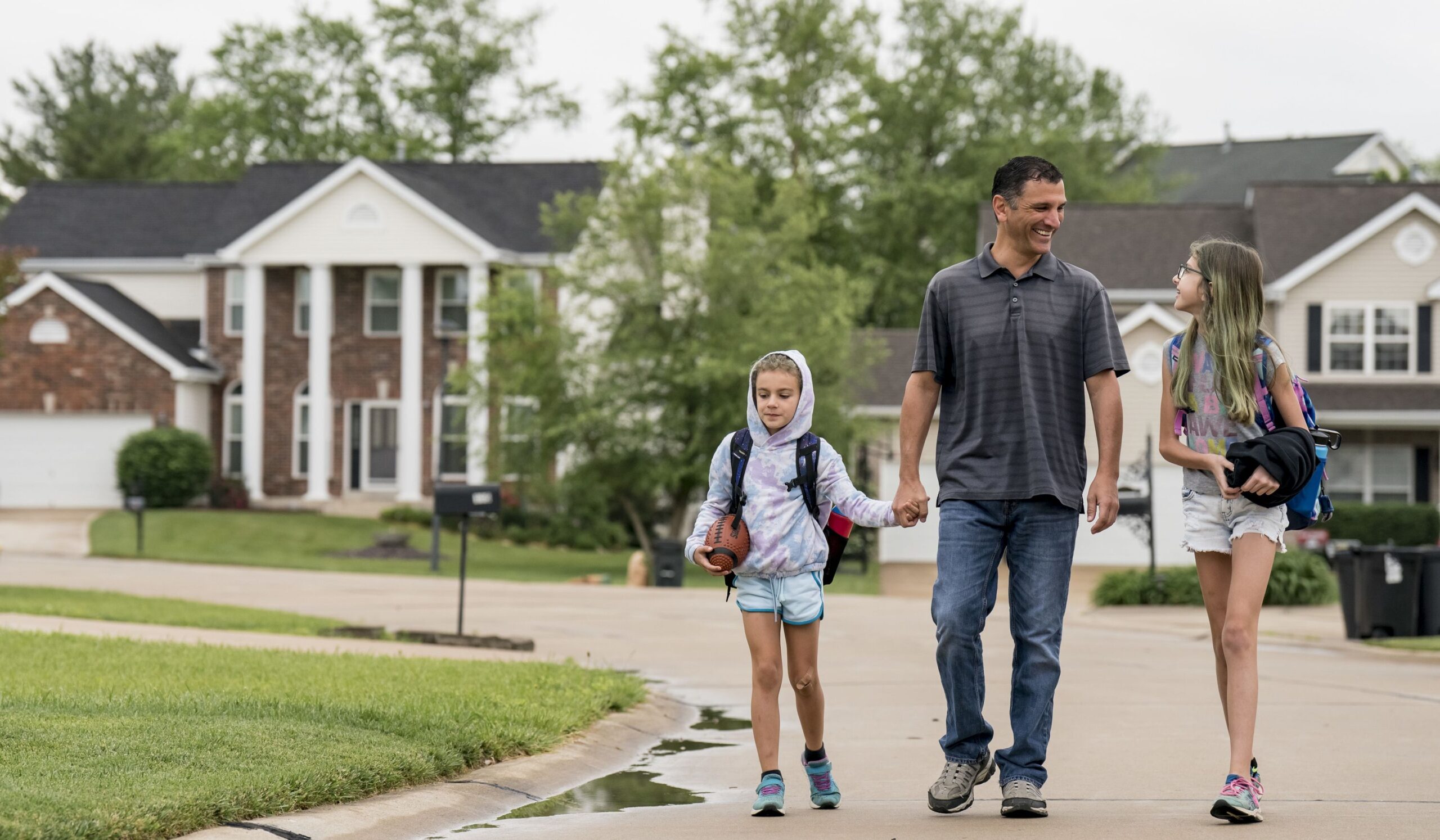 New York City lost hundreds of thousands of people last year — around 3.5% of its population gone in one year. In fact ALL cities with populations more than 1 million saw people move out, with the exception of Phoenix and San Antonio. The pandemic saw thousands of people reevaluate their lives and make the decision to move.

Here are some of the reasons driving this mass migration:

I will be watching this trajectory over the next few years to see if this continues or if it was just a blip due to Covid. 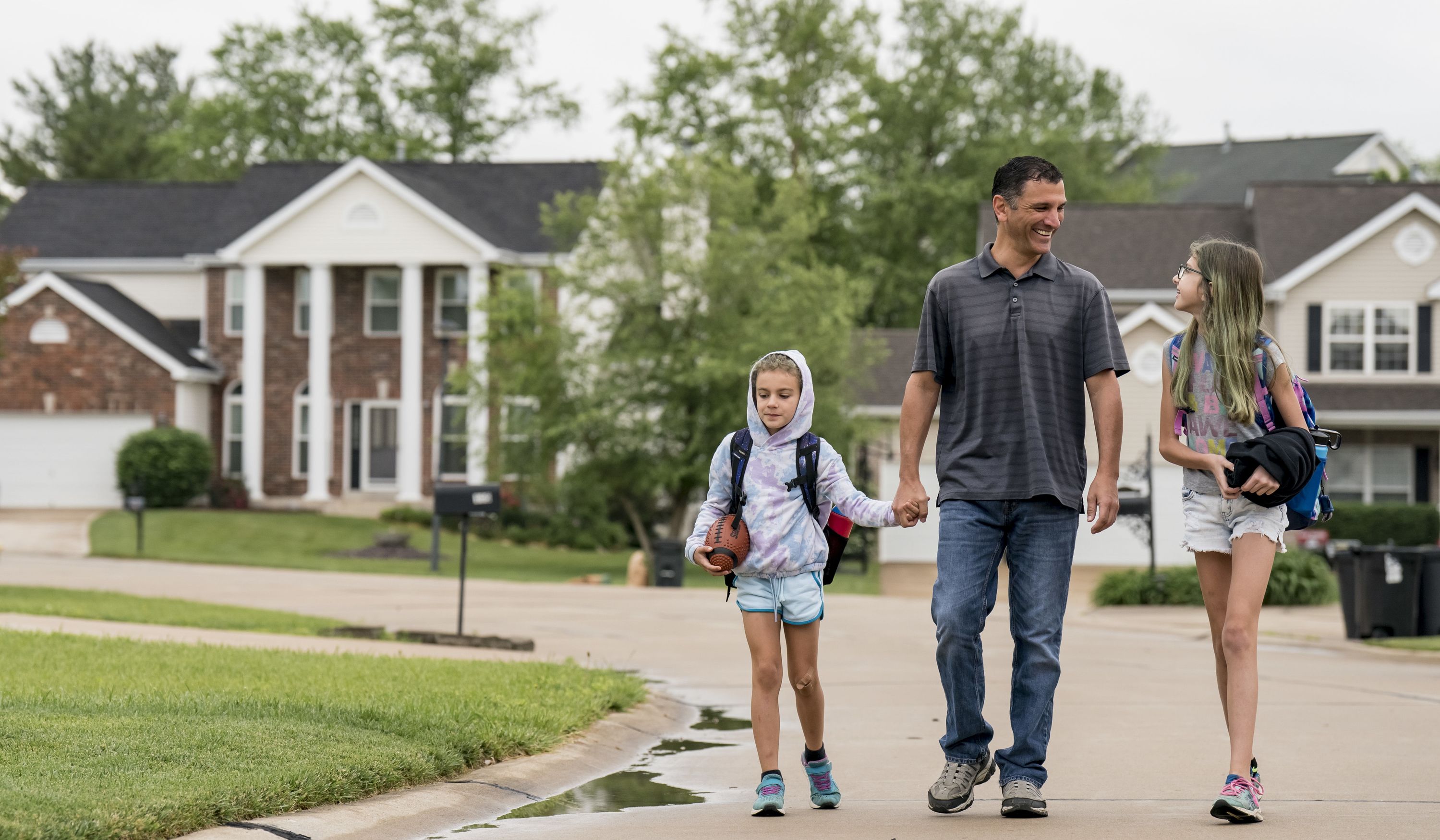 Steve Zara walks his daughters, Jessie, 8, and Holly, 11, to the school-bus stop in O’Fallon, Mo., where the family moved from St. Louis. WHITNEY CURTIS FOR THE WALL STREET JOURNAL

Big-city population declines deepened across the U.S. last year as the pandemic continued sending Americans in search of more space, according to census figures released Thursday.

The largest cities lost a greater share of residents than small- and midsize cities during the year that ended July 1, 2021, new estimates show. Collectively, in the nine cities with more than one million people, the population fell 1.7%, a loss of 419,000 residents. Only two cities in that group grew: Phoenix and San Antonio. 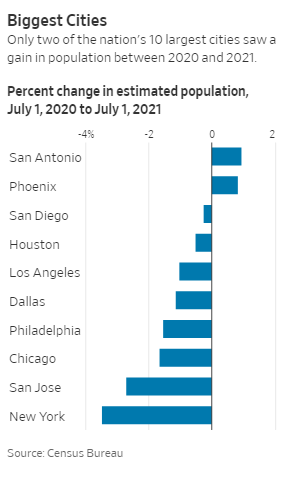 San Francisco’s population fell 6.3%, a loss of 55,000 people. It and Chicago have lost so many people that their populations have fallen close to their 2010 levels.

The nation’s midsize cities, or those with populations of 500,000 up to one million, also saw their populations edge down. Together, they declined 0.7%, losing 148,000 people. The group includes 28 cities, with San Jose, Calif., the biggest and Kansas City, Mo., the smallest. Twelve of the 28 in the group grew last year.

Cities with fewer than a half-million people in effect saw flat growth. The group that ranges from 250,000 up to a half-million residents collectively lost 0.1% of its population, while those with 100,000 up to 250,000 people together grew 0.1%.

The onset of the pandemic in March 2020 set off an initial wave of moves out of cities. The latest census figures suggest that the shift continued as the pandemic dragged on and combined with other economic and demographic forces that began pushing Americans into suburbs and exurbs during the previous decade.

Millennials, born between 1981 and 1996, are entering their prime childbearing years, prompting many to seek family-friendly homes in better school districts. A protracted slump in housing construction and record low mortgage rates drove up housing prices, especially in coastal metro areas, prompting migration to lower-cost areas even before the pandemic. Many in the growing ranks of retired baby boomers also fed the shift, as they cashed out of more- crowded, higher-priced markets. 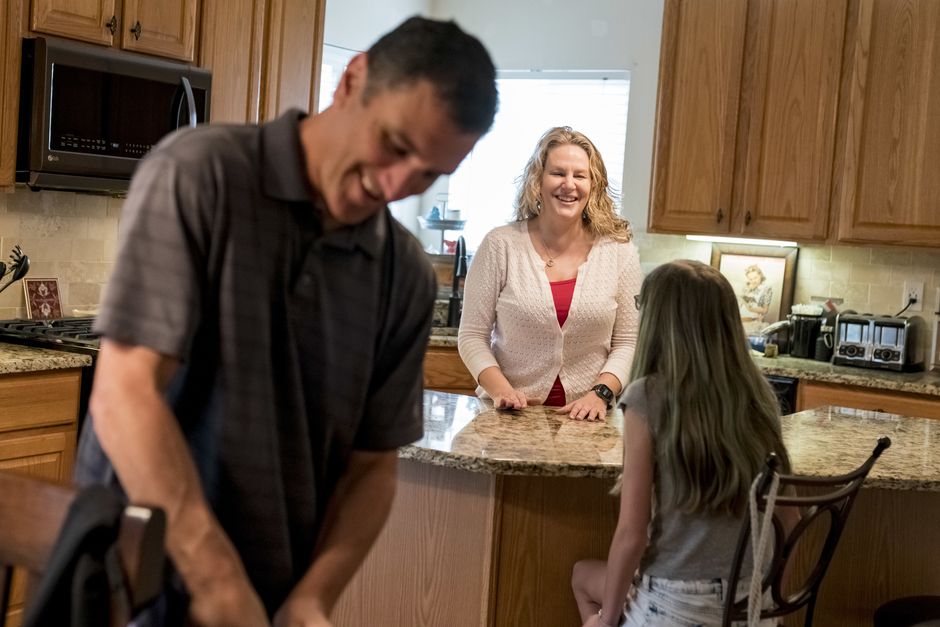 Kelly Zara said she loved the public school where she and her husband, Steve, enrolled their daughters in O’Fallon, Mo.PHOTO: WHITNEY CURTIS FOR THE WALL STREET JOURNAL

The pandemic accelerated the shift in ways that are proving to be lasting. Some employers are making temporary pandemic remote-work options permanent. For some Americans, the pandemic reshuffled priorities in ways that made city living no longer worth its drawbacks, including higher taxes and elevated crime.

Elizabeth Scott, a 38-year-old economic-strategy consultant, was raising two daughters in Portland, Ore., in a two-bedroom house near downtown when she found out she was pregnant at the start of the pandemic. The family no longer fit in their house. Their cars were broken into while parked in their driveway. She watched as homelessness worsened.

“We just couldn’t do it anymore,” said Ms. Scott, who had lived in Portland for over a decade. “I didn’t like going for a run anymore. I didn’t like going downtown. All of the things we had moved originally for, it wasn’t worth the risk.”

Both Ms. Scott and her husband, a software developer, had worked remotely even before the pandemic. Early last year, she was assigned a project to help attract talent to the state of Michigan. She was intrigued by a pitch from officials in the state’s Upper Peninsula, who touted the area’s public schools, abundant outdoor recreational activities, a strong fiber-optic network thanks to Michigan Technological University and an airport with regular flights to Chicago.

Last June, they made an offer on a large house sight unseen in Houghton, Mich., on a 4-acre property, with room for an office for each of them and guests to stay. Daycare for their 18-month-old son costs about half what it did in Portland.

“We absolutely love it,” she said. “We didn’t go to Houghton for a job. We chose it because it had everything we wanted.”

Kelly Zara, 45, had lived in St. Louis for more than 15 years when the city’s pandemic restrictions prompted her family to uproot for a smaller city. Ms. Zara, an infection-prevention specialist at a hospital, said she wasn’t confident city schools would reopen for her two daughters to attend elementary school in person in the fall of 2020. City parks were closed, and the family’s small yard provided little space for her girls to play outside.

“That was the tipping point for me,” Ms. Zara said. “I felt like they were not supporting and trying to keep the things that attracted people to the city open.”

In August 2020, she and her husband sold their four-bedroom brick bungalow in the city’s Tilles Park neighborhood and bought a house in O’Fallon, Mo., a smaller city about 35 miles west of St. Louis. Their new house is roughly twice as big, with twice as much yard, but their mortgage payment is only a few hundred dollars a month more in part because they lowered their interest rate.

Ms. Zara said she was thrilled with the new public school where she enrolled her daughters, ages 8 and 11 years old, and she feels as though there is a lot to discover outside the city. “Until the kids are grown, we’ll be here,” she said.