I messed up.  This is a narrative that edits what I sent over earlier this week. Below is the narrative and orange are my edits.  Sorry for sending incorrect information.

Over the past several years, one of the trends my team has been tracking is the number of California companies that are moving to Arizona. Guess what? This trend is continuing and I believe it will accelerate. The below article on the most expensive office submarkets goes into more detail on why this has been happening.

Some of my main thoughts:

–One of the reasons so many California companies are moving out is the cost of employees AND office space. CA has 36 of the top 100 most expensive markets in the US.

–Some submarkets have  sale prices over $1,000/sf — Wow. This causes rents to skyrocket as investors want a return.

–NY state has an average of over $500/sf (obviously driven by New York City).

–Some surprise states made the list—North Carolina and here in AZ. We had three of the top 100.

Call me if you want to discuss market rates for your submarket or just the market in general.

When it comes to high-demand areas for office space in the U.S., Manhattan is probably the first place that comes to mind. In the years before the rise of Silicon Valley and the consolidation of tech centers as prime office markets, that was almost certainly true.

But, nowadays, understanding the demand for office space isn’t so straightforward. Tech companies have joined financial giants and investment funds in dropping large sums of money into commercial real estate—driving demand in areas other than traditional financial centers.

To find out which areas are the most popular, we compiled a list of the 100 most expensive U.S. office submarkets in 2019 by sale price per square foot of office space. For the purposes of this study, we used Yardi Matrix’s delimitations of submarkets as component areas of a larger office market. For example, New York’s Plaza District is a submarket of the Manhattan office market.

We found that, on average, a square foot of office space in the U.S. went for $233 in 2019. A total of 2,619 deals for buildings larger than 25,000 square feet were struck in the past year. Read on to see which submarkets made the top 10 and check the full list of submarkets below. 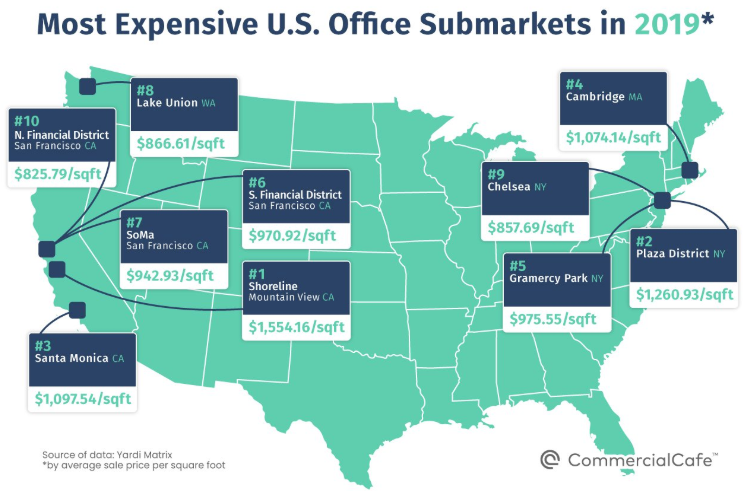 The most expensive U.S. office submarket in 2019 was Mountain View – Shoreline in Silicon Valley with an average price per square foot of $1,554—almost $300 per square foot more than the nearest contender. The submarket was propelled to first place by Google’s acquisition of three buildings totaling more than $300 million; the properties at 1842 North Shoreline Boulevard, 900 Alta Avenue and 1053 Joaquin Road will add 204,000 square feet of office space to the tech giant’s Mountain View campus.

The $600-million purchase and leaseback of the Zynga headquarters by Beacon Capital Partners also turned heads. The property at 650 Townsend Street is part of the San Francisco – SOMA submarket, which occupies the seventh spot on our list, between San Francisco’s South Financial District at number six, and the city’s North Financial District at 10th.

Overall, office submarkets in California fared very well, making up half of the top 10. The state also logged 36 entries out of the total 100.

However, although California led in the number of submarkets in the top 10 and top 100 lists, it was surpassed by the state of New York in average sale price. In 2019, a square foot of office space in New York state went for an average of $515.

New York City’s Plaza District was a particularly popular submarket, seeing a $1,260 per square foot average price from 12 sales. This includes the largest single-property sale of 2019—the Coca-Cola Company Building’s double sale—which was purchased by Wafra for a whopping $909 million, only to be sold just a few weeks later to SHVO for an additional $28 million on top of that. These sales amounted to more than $2,900 per square foot, pushing the Plaza District to number two on our list.

Only three New York State submarkets made the top 100, and all are in Manhattan; all three, however, were also in the top 10.

Office space around the private Gramercy Park is especially sought after, and the five deals in this submarket secured the number five spot. A square foot of office space in Gramercy Park averaged $975 in 2019.

The top 10 list of most expensive submarkets also included Cambridge, MA, at #4, and Lake Union, WA, finished at #8, seeing a total of $1.6 billion trade hands in eight office building deals. Cambridge was situated higher on our list than Boston’s central business district (CBD), which landed at #16. 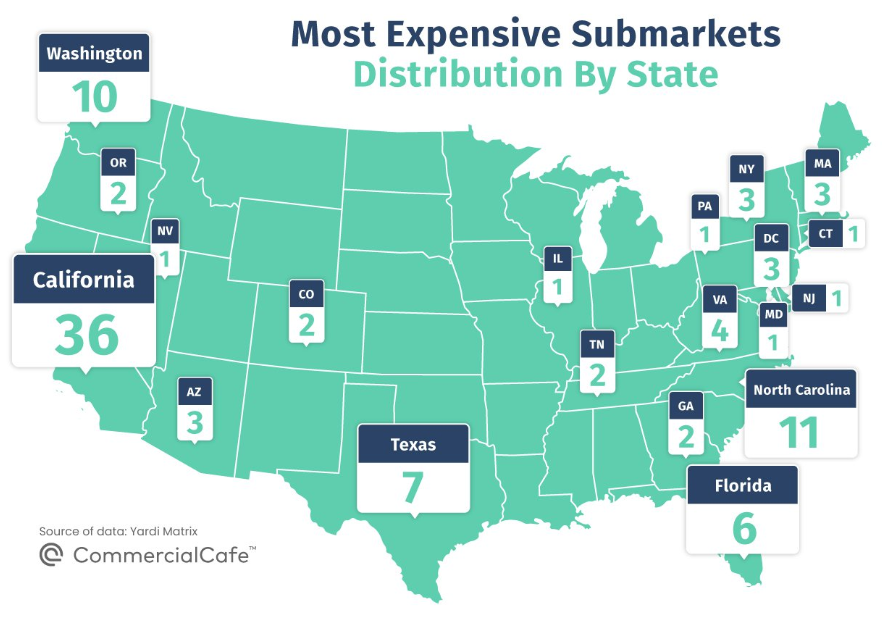 North Carolina had a total of 132 commercial real estate deals in 2019, and 11 submarkets in the state made our list. Of these, the highest-ranking was Crownpoint, which earned the 42nd spot with an average price of $373 per square foot.

The state’s most active major markets were Charlotte and the Carolina Triangle, with 61 and 48 of the state’s deals, respectively.

North Carolina distinguished itself from other markets with its relatively affordable cost of office space; statewide, the average price per square foot was $242. The sale of the 868,000-square-foot Bank of America Tower in the Charlotte CBD for $436 million was the state’s largest sale in 2019 by total price.

In Washington, the state’s 102 deals averaged $381 per square foot of office space – an asking price surpassed only by Washington D.C.’s $508 per square foot and New York’s $515. Besides Lake Union, nine other Washington submarkets made our list. These include Seattle metro’s Bellevue at #14, the Seattle CBD at #23, the I-90 Corridor at #27, and Northern Seattle at #29. The Seattle office market overall had an average price of $414 per square foot.

Moving south, seven Texas submarkets also made the list, with West Houston’s CBD landing in the 47th spot. Florida fared similarly well, with six submarkets in the nation’s 100 most expensive. The highest-rated Sunshine State submarkets were Coral Gables Downtown (#44) and Palm Beach Gardens (#48). Two submarkets in Georgia—East Atlanta/Decatur and Buckhead—made it to #55 and #71, respectively.

And, although many Southern submarkets made the top 100 most expensive list, these states generally benefited from more affordable average prices below $200 per square foot. The only exception is Tennessee at $208 per square foot; the state saw two submarkets make the list: Music Row – Vanderbilt at #60 and Franklin at #97.

As a whole, the Sun Belt gained in popularity, in part due to the population influx resulting from metro-to-metro migration. Another Sun Belt submarket with office space in high demand was Las Vegas metro’s Summerlin with an average price per square foot of office space of $250. However, the largest deal by sale price to close in Nevada last year actually took place in Reno when the Corporate Pointe office building sold for $23 million.

Meanwhile, three submarkets in Arizona also made the top 100: Phoenix-Papago at #73, Gilbert at #79, and Tempe at #96. The highest average price in Arizona was $438 per square foot, paid by NGP Group for its purchase of the GSA Phoenix Professional Office Building in July.

A total of five other submarkets on the list are also part of the Washington D.C. – Suburban Maryland market; Bethesda, MD, reached #54 with an average price of $340 per square foot. Also joining it were four Virginia submarkets also in the D.C. metro: Rosslyn at #46, Alexandria at #53, Tysons Corner at #72, and Reston at #92.

When it comes to the tri-state area (besides New York’s three entries), submarkets in New Jersey and Connecticut were also featured in our top 100. Specifically, Bergen County Central in New Jersey averaged $317 per square foot for the 62nd spot, while Stamford, CT, reached #75. Both submarkets are situated in the New York metropolitan area.

Furthermore, Philadelphia’s Center City District submarket reached #61 with an average price per square foot of $318. It was also the location of last year’s largest office deal in Pennsylvania: the sale of 1735 Market Street for $451 million.

Among the states with fewer entries in the top 100, Oregon and Colorado had two each.

Oregon’s Goose Hollow and Downtown Portland submarkets ended up at #39 and #45, respectively; both are part of the Portland office market.

The submarkets from Colorado that were among the most expensive in 2019 were Denver – Cherry Creek at #31 and Boulder at #88. Notably, the Denver office market was the second-most active in the U.S. last year with a total of 117 deals; it was surpassed only by the Washington D.C. – Suburban Maryland market.

To determine the most expensive submarkets in the U.S., we looked at office transactions closed between January 1, 2019 and December 31, 2019, according to data provided by Yardi Matrix.

The terms submarket and market are used exclusively by the Yardi Matrix Real Estate Intelligence Source, and area delimitations are traced by its real estate professionals.

We only included sales of offices larger than 25,000 square feet and submarkets that registered at least three transactions.