Below is an interesting article from The New York Times about office landlords seeking a competitive edge in leasing space to tenants.  Our primary market is Phoenix, so when I travel or read, I am always watching out for trends and changes in what owners are doing and what tenants are leasing.  Here are three things that we are just starting to see in Phoenix:

1. New York building owners are installing auto-dimming windows into their offices to try and get a leg up on their competition.  I was on a Southwest flight a month ago and the windows on the plane had this technology.  I found it really cool. I don’t think it would change my decision to lease office space but it was great new technology.

2. $9.6 Billion was invested in Real Estate technologies for office connectivity and other amenities. This is going to be a game changer.  There is a lot of disruption starting to happen.  For example, Audio visual TI’s are $5 – $15/sf  more than they were just 5 years ago. Read this narrative every chance you get as this trend is one of my primary focuses.

3. There is a ton of focus on automating building systems and creating remote access (which leads to more security risk).  These systems are trying to create a more inviting building for tenants.

Keeping the above in mind but know that location, transportation, access, and floor plans are still the main decision drivers.  The more change we see, the more the fundamentals remain critical.  I remember back in the 90s there was a developer that built Class A buildings in Class B locations as a strategy.  The idea flopped.  Even today, those buildings are still very nice…and they continue to trade at a far lower price per SF because they can’t attract quality tenants at higher rents.

If you want to talk more about these trends, shoot me an email or call.

As Office Tenants Expect More Tech, Even the Windows Get Smart

To stay competitive, developers and landlords are being driven to add telecommunications infrastructure, video screens and, yes, glass that tints itself automatically. 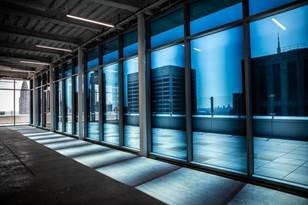 Smart windows from View in a building in Midtown Manhattan darken as the sun becomes brighter. Developers and landlords that offer advancements in office space may be able to command premium rents. Credit Jeenah Moon for The New York Times

Office developers and landlords once had to think only about supplying electricity, plumbing and heating to workplaces, leaving tenants to design their offices to their own technical specifications.

But these days, the providers of office space are being driven to provide telecommunications infrastructure and add sophisticated technology like smart windows to better compete.

Every year, office technology becomes more advanced, and developers and landlords have to stay on top of the trends or risk falling behind. Those that have the technological prowess may be able to command premium rents, but those that lack it may be forced to offer a discount.

“It’s placing more pressure on buildings to be that talent magnet for tenants rather than just a people warehouse,” said Phil Mobley, head of research for Building Engines, a property management software company in Boston, and vice chairman of the technology committee of Building Owners and Managers Association International.

The increased attention to technological upgrades has attracted the attention of investors. Venture capital investment in real estate technologies was $9.6 billion in 2018, according to the data supplier CREtech. In the first quarter of 2019, it increased 250 percent to $4.9 billion over the same period in 2018.

The office space market is loosening in some cities. In New York, for instance, the vacancy rate rose to 9.2 percent in the fourth quarter of 2018, from 8.9 percent a year earlier, according to Cushman & Wakefield. As the market softens, office providers are scrambling to meet the expectations of tenants.

DivcoWest, a developer in San Francisco, is placing technology at the forefront of Cambridge Crossing, a 45-acre mixed-use development under construction in Cambridge, Mass. By offering high-tech infrastructure, Cambridge Crossing is angling for the same type of companies that have found a home at Kendall Square, a tech hotbed a half-mile away with tenants like Facebook and Google.

When finished, Cambridge Crossing will have six office buildings with 2.1 million square feet of space. Tucked underground, concealed behind walls and hidden in the ceilings will be an estimated 10 miles of fiber-optic cable, which promises robust Wi-Fi with uninterrupted connectivity everywhere on the premises.

The Dutch technology giant Philips has already signed on, leasing seven floors in the development’s first office building, which is nearing completion, for its North American headquarters.

Inside, the conduits route to an equipment room on an underground parking level. The room is capacious and will be climate-controlled — a far cry from the cramped and makeshift spaces, sometimes near the boiler room, that make wiring in older buildings vulnerable to overheating or an accidental whacking by a mechanic.

“In the past, we’ve done spare conduits into a building but not the redundancy,” said Tom Sullivan, president of development at DivcoWest.

As competition to provide the best technology in office buildings increases, some companies are trying to help developers achieve their goals. The New York consultant WiredScore, for instance, certifies the reliability of a building’s internet connectivity. So far, more than 1,800 office buildings globally have registered for or achieved its certification, with about half of them in the United States, according to the company’s founder and chief executive, Arie Barendrecht. Cambridge Crossing is being designed to obtain Wired certification for the entire development.

Real estate experts say traditional considerations like location, access to transportation and floor-plate size remain the main reasons tenants pick one place over another. But hoping to gain some sort of advantage, some office providers are beefing up other sorts of tech in their buildings, including antennae for picking up and amplifying cellphone signals and lighting sensors that track the brightness of the sun.

The windows were supplied by View, a company in Milpitas, Calif., that makes “dynamic glass.” When the sun shines, a coating between the double panes of glass will darken, like self-tinting glasses. This reduces glare (which can cause eye strain, headaches and drowsiness) and heat gain (which may require turning up the air-conditioning, thus increasing energy use), while maintaining natural light.

As smart as the windows are, they will eventually become even more functional, said Rao Mulpuri, the chief executive of View, which in November announced a $1.1 billion investment from the SoftBank Vision Fund. He said windows would eventually be used like computer screens, displaying content and used for videoconferencing.

Some expect smart technology to expand beyond windows. Andrea Chegut, director of the Massachusetts Institute of Technology’s Real Estate Innovation Lab, predicts that interior office walls will one day be “turned into data centers, capitalizing on fiber-optic connectivity.”

Already, wall-hung video screens for sharing content, once seen only in boardrooms, have been proliferating. These types of audiovisual systems account for the largest cost increase in office design in recent years, according to the real estate services company CBRE. Five years ago, audiovisual costs averaged $5 per square foot; now, it’s common for developers to spend $10 to $20 per square foot on the systems.

At the gleaming new headquarters of the electronic trading platform MarketAxess, in Manhattan’s Hudson Yards and designed by the architecture firm Spacesmith, screens glow in practically every meeting space on the firm’s three floors, including the small “huddle” rooms where employees can duck in for quick one-on-one meetings.

In other ways, however, technology is intentionally concealed at MarketAxess — or it is moved off site. In the boardroom, there is no messy tangle of wires erupting from the table’s smooth marble surface; drawers under the tabletop provide electrical outlets and data ports. The room has two jumbo wall screens, but all the equipment powering them is tucked away in a walk-in closet down the hall. The office’s main data center is in New Jersey.

Daylight sensors along the windows dim lights when the sun is bright. Window shades go up and down depending on the time of day. 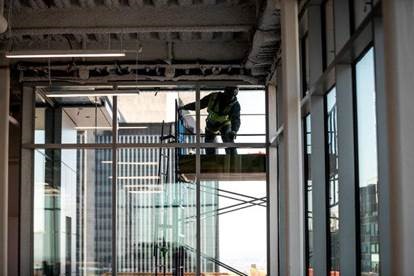 Despite all the automation, some workers like to maintain a little control over their environment. At MarketAxess, software developers on the 17th floor decided the overhead lighting was too bright, so they shut off some of the lights in the ceiling fixtures above their desks. And the firm’s chief executive, Richard M. McVey, did not like the constant creep of window shades in his corner office.

“We turned his off,” said Daniel Wolff, global head of infrastructure for the firm.

Motion sensors that shut off lights in empty rooms have long been used in offices to save energy, but the monitoring information they provide, along with other building data, is increasingly being shared with employees.

Using mobile apps or computer software platforms often provided by the landlord, employees at some companies can use their cellphones to, say, scope out different gathering areas before deciding where to meet colleagues. After checking data on occupancy, daylight and temperature, they can decide whether to head to a sunny part of the office where others are already congregated or to a quieter spot where they can work without distractions. In turn, the data is being monitored by building operators to determine things like whether to increase the flow of fresh air to a crowded part of the floor or scale back janitorial services in a less-frequented area.

All of which raises the Orwellian specter of surveillance that tends to make some Americans skittish. Some companies in China have embraced facial recognition software at building security points, which, for example, allow employees to move from the lobby to an elevator without pausing to slap down building identification cards at turnstiles. But there has been resistance to such technology in the United States.

And even proponents of connectivity admit that the more digital offices become, the more security risks are created.

“There are so many great benefits of a digitally enabled building,” said Mr. Barendrecht of WiredScore. “There’s also a downside.”