I spend a ton of time working with my team on growing their individual skills, increasing our deliverables and really making sure we are engaged. As we work with big and small companies and I talk to our clients, engagement has become one of the most desired (and least attainable) traits in companies today. A few years ago, Gallup blew everyone out of the water with its first State of the American Workplace in 2013. Sadly, there has not been much change in the past 18 months. The war for talent is hot and getting hotter. How we all perform is directly attributed to our teams.

Below is a good summary on why engagement is not getting better and some suggested changes to your management style and methods. Winning the war for the best people is a start. Then you have to engage them. I can tell you unequivocally that my team is the best in the business and they are engaged. I am also happy to discuss how we hire, what we do to train and how I know my above statement is true.

Read below for more. Of course I have highlighted for easy reading using two colors to separate some interesting statements and some suggested changes you can make in your organizing to get on the right path for engaged employees. 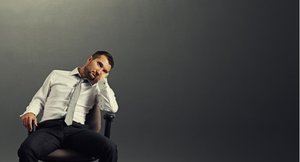 American business is losing its war on engagement.

As a quick reminder on why we took up arms in the first place, it was June 2013 when Gallup first released its State of The American Workplace study that revealed only 30 percent of the nation’s workers were fully engaged in their jobs.

Since then, companies have gone on to launch all kinds of well-intended missions, campaigns and strategies, all with the goal of upending apathy, discontent – and the low discretionary effort too often displayed by their rank and file employees.

Yet despite all these noble and seemingly effective efforts, we’re confronted with a sobering truth: we’ve gained very little ground.  According to Gallup, growth in engagement has remained flat for most of 2015 – and we’ve seen little more than a two-point increase over the past two and one-half years. 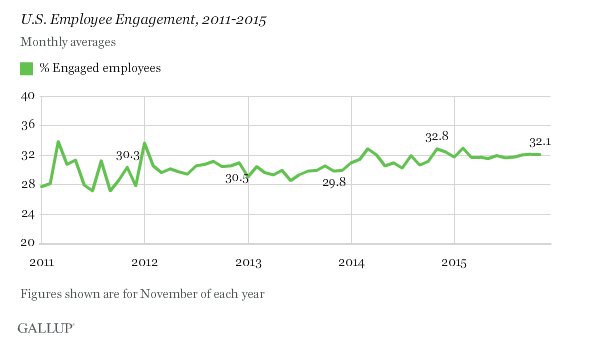 “How could this possibly be?” is a question many people will be asking, particularly if their organization’s deployed significant resources to rally back their troops.

To help me provide the most informed answer, I recently met with Dr. Jim Harter, Gallup’s engagement Jedi for the past three decades. I asked him to weigh in on why engagement remains such a critical metric for organizational success, why we have so little to show for all the additional focus that’s been given to improving it – and to share some of the uncommon things high-performing companies have discovered move the engagement needle in a more meaningful way.

One thing’s for certain. Traditional leadership practices have produced the enemy that is low engagement. To defeat it, we must have the courage to reject many of our archaic methods, and to adopt ones known to have the greatest impact on inspiring human performance in the workplace.

Why The Engagement Metric Matters
When Gallup began measuring engagement in the 1990’s, scepticism about the meaningfulness of the metric was common. But over time, as other well-known research organizations initiated their own studies, it’s become much more widely accepted that engagement elements predict how well an organization will perform – all the way down to the bottom-line.

According to Harter, “those outcomes range from basics such as absenteeism, employee retention rates, service levels and productivity; and ultimately it all adds up to about a 22 percent difference in profitability when you compare top quartile business units to the bottom quartile.”

Most Organizations Are Just Moving Peas On Their Plate
Perhaps the biggest reason engagement hasn’t budged is because many organizations are under the illusion that they’re already succeeding.

“What a lot of companies have done,” says Harter, “is to simply replace the terminology for their annual survey and call it an engagement instrument. Making things worse, they vary widely in terms of their definitions and what they measure. A whole lot of things are now being called engagement that shouldn’t be.”

Very often, Gallup finds that the hodgepodge of questions being asked produces greatly inflated engagement scores that create a false comfort. “Reporting high numbers seems to make a lot of leaders feel good,’ says Harter, “but those won’t get them where they need to be.”

It may also come as a surprise that the top organizations Gallup works with have just 65% of their workers fully engaged. While this number is twice the national average, and is inherently best-in-class, it belies what many of us imagined represented the highest level of success.

Engagement’s A Big Ship That Won’t Move Quickly If All We Do Is Measure It
I asked Harter if he was surprised that the engagement needle hadn’t been more significantly improved over the past 30 months, and he reminded me that big ships don’t turn quickly. “When you’re changing the culture of a working population, it’s going to take time.”

Nevertheless, the best companies Gallup works with consistently see a 7-to-9 percent improvement in a given year, and it’s because they intentionally align their performance management so that everything they do is on the same path. Stressed Harter, “the employee engagement survey is not treated separate from everything else they’re trying to get done.”

The rapid progress of the most successful organizations led me to wonder if most American companies have really begun taking engagement seriously. And Harter had this rather unambiguous answer at the ready: “I’d say it’s serious enough that it’s become a check-the-box HR activity, but not serious enough to have a meaningful impact and raise their score.”

To get engagement moving – and for all employees to believe its something to which the organization is fully committed – “it really needs to start at the CEO and executive level,” Harter told me. “The reason is that people need to know that it’s a firm expectation to which every manager and leader in the company is fully accountable. The gap today is that engagement’s being consistently surveyed, yet few companies have created the culture that lines up with their expectations.”

Most Perks Have Modest Impact
Gallup is surprisingly indifferent to perks noting that they’ve proved to be neither a cure-all to an ineffective boss, or even an influence on high achievement. Perks often give workers joy and convenience, but they don’t prove to retain people.
But extensive research has revealed two particularly valuable insights:

Engagement Has The Hallmarks Of Flow: “When people work too many hours, don’t have enough vacation time or are expected to look at e-mails after normal work hours,” says Harter, “the data shows their stress levels increase significantly. But we’ve discovered that employees who have the right work environment, and who are truly engaged in their work, really manage that stress.” Said another way, being engaged in one’s job directly influences feelings of well-being even when that job is especially demanding.

Flex-Time Is A Great Perk: Harter told me he does some of his most important work from his home office, and for 30 years Gallup has afforded all of it’s workers tremendous work-day flexibility. “Letting people work from home some days, arrive at work later to avoid a tedious commute or stay home with a sick child – these accommodations are highly valued by people. What makes it so meaningful is that it’s individualized. Employees know that you’re intentionally being supportive of them, and those feelings drive up engagement.” Harter insists that this flexibility must be accompanied by accountability, yet people often work harder in response to caring support.

Engagement Largely Comes Down To Whether People Have A Manager Who Cares About Them, Grows Them And Appreciates Them
“We’re now at just 32 percent engagement; and for all the people in management roles today, this is their scorecard,” says Harter. “There’s simply no question that managers are one of the top root causes of low and flat-lined engagement.”

The clear implication is that many people in managerial positions are failing for one of two reasons. They either lack the skills needed to effectively motivate people to perform, or they lack an understanding of what practices consistently drive workers to become fully engaged.

“We think high-performing managers have five talents,” says Harter. “These are leaders who not only engage their teams, but who consistently drive high productivity, service levels, retention and profit:

Remarkably, Gallup’s discovered that only twenty percent of the entire population possess all these talents – that they’re hard-wired into very few of us. And even with focused training, only three-in-ten people will ever successfully master all five.

Consequently, if organizations really want to see their engagement skyrocket, their first and most important step going forward must be to ensure only people who demonstrate these unique abilities ever get promoted into management roles.

But for companies who are truly committed to driving uncommon engagement, they must raise the bar even further. That’s because there’s another traditionally unappreciated quality that’s been consistently proven to turn managers into talent magnets: they care deeply about their people.

“They share, teach, coach, support, and appreciate their employees,” Harter told me. Regardless of what’s on their plate, they invest the time to know their people personally, what motivates them – their career dreams and aspirations. And “this kind of nurturing is the undercurrent of all five talents.”

Within its 12-question engagement survey, Gallup asks workers whether they “feel someone at work cares about them as a person.” And as soft as this one question may seem, it’s proven to have a direct impact on a multitude of hard business outcomes including employee retention, discretionary effort – and profit.  The key take-away from all of this: Managers with highly engaged teams intentionally lead with heart.

Conclusion
While American businesses have taken aim at improving engagement for quite some time now, meaningful progress has so far proved illusive. So I asked Harter if Gallup would put out a challenge for 2016:

“Assuming companies really got behind it and began to adopt many of the practices known to greatly improve engagement, how much higher could the US score be at the end of next year?”

“If the commitment is really there, we could hit 40% engagement by next December, Harter insisted. “And if we get there, we’d all have a tremendous achievement to celebrate, not to mention some great organizational success that will undoubtedly come with it.”