As I speak to out-of-state users, owners, and investors, one of the most popular topics I get to discuss is water. The general feeling by out-of-state people is that Arizona is a desert and we are running out of water. Not true. Below is a great summary written by the local paper, The Arizona Republic, that covers the top 5 reasons to panic about Arizona’s water, and 5 reasons not to.

As Arizona grows and matures, we will use more water. At the same time, we will use less water for farming. It turns out that cotton is very thirsty to grow. But that is not the main concerns today. Below is a great summary of our status and covers both sides of the issue.

P.S. As a follow-up to our 5-week series in the beginning of this year, the new headquarters for Apple is now under construction, for those of you who are interested. If you scroll down below the water article, you can see some updated photos of the site and a schedule. Amazing project.

5 Reasons to Panic About Arizona’s Water, and 5 Reasons Not To

Is Arizona Really Running Out of Water?

As brown became the new green in drought-stricken California this summer (and as “Drought-Stricken” became that state’s unofficial first name), some of the national media took a quick look around and started asking: If the Golden State was shutting down its sprinklers, was the whole West about to dry up and blow away?

A June story in the Arizona Daily Star outlined the ways Arizona could end up with an official water shortage, but it pronounced the chances of that happening anytime soon to be “slim.”

Within days, the New York Times weighed in with a more dire take. Citing drought projections by the Central Arizona Project — which moves water from the Colorado River to Phoenix and Tucson — an article warned the canal might cut its deliveries to the state’s urban areas as early as 2019.

That opened the floodgates (even if they hold back less water these days) of the idea. Arizona was out of water.

Smithsonian.com posted an item online with the headline “Arizona could be out of water in six years,” linking to the Times story, an Environmental Protection Agency report on climate change and background material. Other online sources followed up.

Not so fast, Arizona’s water experts say. First, projections about shortages on the Colorado River weren’t new. As early as 2004, after a series of record-dry years on the river and across Arizona, CAP hydrologists had started saying the Colorado system might run short by 2015 or 2016. One worst-case outlook pegged the date at 2011. Of course, 2011 came and went, and the Colorado was still running.

The CAP disputed the Times story. Water agencies in the state tried to reassure residents and businesses that there was no impending crisis.

But then in July, Lake Mead, the giant reservoir that had been dwindling for most of the past decade, finally sank to its lowest level in 77 years. The milestone raised the commotion again.

So, is it time to hightail it out of here? Brace for waterless Wednesdays?

Is Arizona really running out of water?

Here are five reasons why the drought should concern you and five more why we’ll survive it — this time:

You should take this drought seriously because:

Yes, Arizonans have been hearing about the drought for so long it has become background noise, but that’s because the state has had below-normal rainfall levels for so long — all but a few years since 1999. If the monsoon can’t recover, Phoenix could post one of its driest years on record, at least at the official Sky Harbor measuring station, which has collected just 0.06 inch since June 15. And things have been dry all across the West, from California to the remote peaks in Colorado, which means …

2. The Colorado River is hurting.

It’s true, rain in metro Phoenix doesn’t do much for the water supply, because there’s so little of it that most water is imported from elsewhere. But a lot of that water comes from the Colorado River, which is a source of water for 40 million people in seven states, including Arizona. And the Colorado has seen below-average runoff in all but three years since 2000. Lake Mead has fallen to its lowest level since it started filling in the 1930s. The other big reservoir on the river, Lake Powell, is half empty. If Lake Mead continues to shrink, current legal compacts lay out how much all seven states have to cut back on water use. Which leads to …

3. When the Colorado shrinks, Arizona gets burned.

Here’s how the deal among states works, in a nutshell: As Lake Mead gets lower, Arizona has to start cutting back on its take; so does Nevada, which agreed to share Arizona’s pain. California gets to keep its whole share, for as long as there’s enough water on the river. Wait, why does Arizona get such a raw deal? It goes way back to 1968 — Arizonans wanted to build the CAP Canal to take more water but needed California’s congressional support. California agreed, as long as it got to keep the water when things got dicey. So yes, Arizona gets the short end on this deal. On the other hand, if the CAP Canal hadn’t been built, Arizona wouldn’t have been able to get much water out of the river anyway. The canal helped provide for a lot of new growth in Phoenix and Tucson. Some parts of town get water from reservoirs inside the state, but …

Not everything comes from the Colorado — about half of the water supply for metro Phoenix comes from Roosevelt Lake and the Salt and Verde rivers, right? Well, things aren’t much better there. Roosevelt, the largest in-state reservoir, is just 39 percent full. Together, the six reservoirs on the Salt and Verde are at 49 percent of capacity. (By the way, Flagstaff gets a significant share of its water from Lake Mary — it’s shrinking, too, with no change in sight.) All of this means Salt River Project, which manages the system and delivers water to farmers and Valley cities, will likely start to pump more groundwater instead, as will farmers in central Arizona. And you can probably see where this is going …

5. Groundwater supplies are shrinking at an alarming rate.

A new study by NASA and the University of California-Irvine found the Colorado River basin has lost 41 million acre-feet of groundwater since 2004. That’s the equivalent of the entire amount of water in Lake Mead when it’s full, plus half of another Lake Mead. Enough to supply the residential water needs of every person in America for one year. Gone. And it doesn’t just come back. Scientists say states pumped from their aquifers to make up for dry years on the river. While one wet year can start to refill a reservoir, groundwater stores can take centuries to recover.

But wait. Don’t panic. Arizona is not in the same beached boat as California, because:

1. You might not even notice the cutbacks at first.

If there is a shortage on the Colorado River, the first people to lose it are farmers in central Arizona. Their rights are lowest on the list.Homes and businesses in the three counties served by the CAP Canal (Maricopa, Pinal and Pima) get higher priority. Even under the worst case outlined in the drought plan, about 1 million acre-feet would continue to flow down the canal each year during the shortage, enough to provide what cities currently take from it. (That’s as long as the river can supply that much water. If things get bad, biblically bad, the CAP would have to shut down. The only people with rights to the very last drops of Arizona’s share are the farmers in Yuma — their rights are the most senior of all.)

A whole lot of the Colorado River water Arizona has taken with the CAP Canal didn’t actually get used — it was poured into underground water banks, sort of like simulating a recharged, natural aquifer. Since 1996, the state has stored about the equivalent of two full years of CAP water. Recovering the water wouldn’t be cheap because it would require construction of wells that don’t exist and would be a one-time fix in some areas, but it would buy time for drought conditions to ease.

3. We’re getting better at using less.

Water demand leveled off as Arizona and the other states on the river dealt with the recession and downturn in housing. At the same time, requirements to build homes with low-flow plumbing and less landscaping reduced use in the newest developments.

4. We’re getting better at making it last.

Arizona passed laws in 1980 to protect groundwater supplies in five areas. Since then, it has worked with neighboring states to use water more efficiently, building a reservoir west of Yuma to capture water unused by farmers. And the CAP joined water agencies in Colorado, Nevada and California this summer to provide incentives to cities, businesses and farmers to use less water.

One above-average runoff year on the Colorado River or on the Salt and Verde rivers could buy Arizona more time to prepare for shortages. Reservoirs have briefly recovered some of their losses during the 15-year span; Roosevelt Lake can, in theory, refill in one wet year — that alone could mean a few extra years of supply.

Still, experts say the West needs to address its water-supply issues soon. Studies show that overall temperatures are rising. That means less snowpack or shorter runoff seasons. That means lower river flows. The groundwater study shocked many water agencies because it revealed huge losses. And it underscored the fact that the states have often drawn more water from the river than annual runoff can replenish.

So yes, Arizona is running out of water — just the way it was when it built the Central Arizona Project, the same way it was when it passed the groundwater-protection laws. It’s highly unlikely that anything dramatic will change for most Arizonans in the next six years. There’s a lot of water left out there. But only time and people’s decisions will tell if it’s enough. 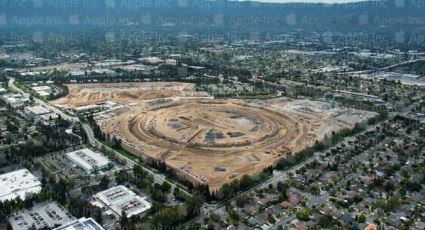 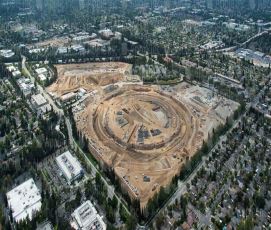 Following an update late last month from the City of Cupertino on progress being made at Apple’s currently under construction Campus 2 project, now the City has shared an official updated aerial photo of the site from Apple.

Last month the city shared the first official photo with an overhead shot showing the entire campus and surrounding area. Today’s shot shows that progress is continuing on the main structure’s foundation and surrounding campus, but also gives us a wider field of view for a nice perspective of how the site fits into the surrounding city. Previously a number of amateur aerial shots of Apple’s Campus 2 popped on Instagram and elsewhere online.

As for the building schedule, the City of Cupertino continues providing updates on road closures and traffic updates related to the project, but as of today’s update its timeline for completion of the campus (below) remains end of 2016.

Some more shots of the site were posted today by KCBS news and traffic reporter @sky1ron: 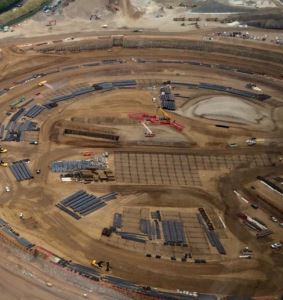 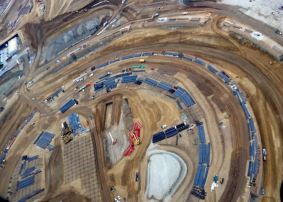 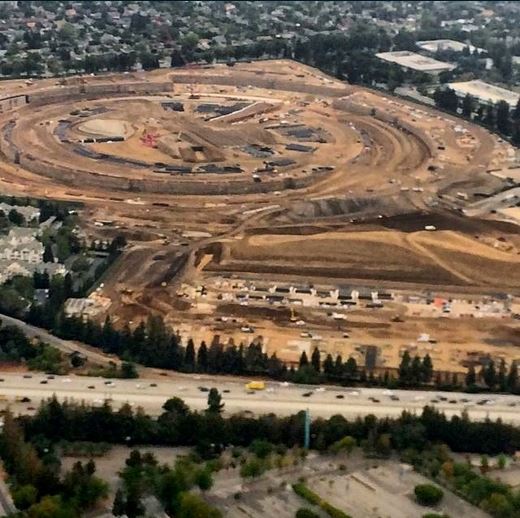