In my weekly narrative, I spend quite a bit of time thinking, talking, and looking at the future. Below are seven bold predictions by some of the leading thinkers in our industry. Here a few key predictions that stand out:
–Malls will soon be extinct
–Technology will run buildings (we see that coming today)
–Green buildings will become the norm
–Our schools will require a tremendous amount of money to retrofit just to EPA code—try $75 Billion.

We hope to continue providing you updates and insights long before they happen.

P.S. A month ago, I got to hike and summit Mount Kilimanjaro, Africa’s tallest mountain with one of my partners at Lee & Associates, Jim Watkins…I created a brief slide show of our experience. If you’d like to see some cool photos, please click here. Below is a photo of Jim and me at the summit. We will lease space anywhere! 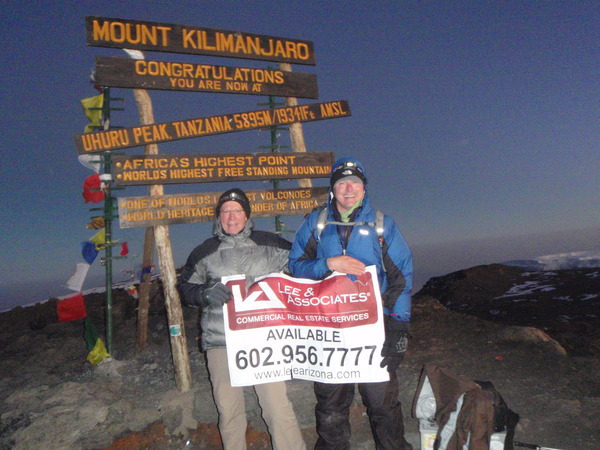 Conjuring the future of commercial real estate begins by conjuring our future. How will we work, live, shop or do business? Perhaps no other investment sector is so closely tied to people’s most fundamental needs and behaviors; its evolution, to a large extent, follows ours.

Take it from Peter Linneman of Linneman Associates and the Albert Sussman Emeritus Professor at The Wharton School of Business, who pioneered the academic study of real estate and was named by the National Association of Realtors as one of the 25 most influential people in the business. Commercial real estate, he said, “exists to service the economy and society. That’s all we do.”

Over the next 25 years, say Linneman and other key players in the industry, commercial real estate will be buffeted by changes in demographics, technology, globalization, economic and environmental realities and a host of other trends. Some pieces of the trillion-dollar global industry will adapt; others will fall away. It will still be a cyclical business, but no matter how it changes, commercial real estate is expected to be thriving in 2039.

1. Most shopping malls will be extinct.
The world of the American shopping mall, said Kenneth Riggs, president and CEO of Real Estate Research Corp., “has been a Darwinian environment since the 1990s with the advent of big-box retail and the ‘Wal-Marting’ of the world—and it will stay that way.” In other words, expect malls to continue their decline due to the rise in e-commerce, with only those consistently producing very strong revenues still doing business in 25 years.

“As the J.C. Penney’s and Sears continue to lose market share to online retailing, you’re going to see more dead malls where the anchors go dark and ultimately are worth only the land they’re built on,” said Tom Bohjalian, executive vice president at Cohen & Steers, which was the first investment company to specialize in listed real estate.

Teardowns may not be the only way to capture value in defunct malls, though, said Rick Fedrizzi, president, CEO and co-founder of the U.S. Green Building Council. He predicts that with repurposing, they’ll be a useful resource when our way of life swings back to revolving around more compact communities. “Established places like shopping malls will become like town centers, where people can come together, where their doctors and day care will be, where they can gather after major devastations.”

2. Brick-and-mortar will go tech—and warehouses will go back to the drawing board.
As consumers increasingly shop on their computers and phones, brick-and-mortar retailers will need to adopt the attitude ‘If you can’t beat ’em, join ’em’ in order to survive. Innovation will be key, making use of technology that integrates omnichannel shopping into the physical experience of being in a store and matching the logistical advantages of online merchants.

“People want to look and touch; they want instant gratification, too,” said Maria Sicola, an executive managing director at real estate services firm Cushman & Wakefield, even as selling floors become smaller. “Perhaps there will be the equivalent of a mini warehouse within the store so you can go in the back room and buy what you want.”

Apple is one retailer already using this forward-thinking approach in its stores. Its sales floors feature products that people can touch and try on their own, spending as much time as they’d like. They can buy and take home merchandise if they choose, or they can go home, do further research and buy online—with free overnight shipping. This may be a model other retailers will emulate.

Efficient distribution will be key, and the increasing importance of logistics and automation will impact warehouses across the country, many of which are obsolete even now, lacking up-to-date technology and adequate clearance height and often too remote to accommodate same-day delivery. That will add up to a lot of activity in the industrial sector in coming years, with old warehouses being retrofitted or new ones being built.

3. Baby boomers will be behind the biggest construction boom.
The big generational bulge of the 20th century hasn’t finished exerting its outsized influence yet, and commercial real estate will continue feeling its weight in the next quarter century. “We’re an aging population, so in 25 years there’s going to be a heavy focus on medical-related facilities,” said Riggs, who also predicts a shift back toward affordable, multigenerational households that will translate to increased multifamily residential, particularly in close proximity to mass transit.

In seven years boomers will turn 75, a magical number in one way, said Linneman, because that’s when people usually begin moving into senior housing. When this huge and demanding demographic is ready for the next stage of their lifestyle, rest assured: “It will explode,” he said. “Right now senior housing is a food group in real estate, but it’s like vegan or something, not that established. In 25 years it will be a major food group.”

4. Urbanization will sweep the planet.
If there’s one thing all our experts were clear about, it’s that our world will be significantly more urbanized in 2039. There will be a rise in the number of megacities—urban areas with more than 10 million inhabitants.

Baby boomers will be part of that phenomenon—many empty-nesters are attracted to the manageable charms of the city—but it’s the desire of Gen X and Gen Y cohorts to live, work and play in a compact area that’s largely fueling the trend. Multifamily residential stands to gain, but companies keen to attract young, educated talent are paying attention, too, and positioning themselves accordingly.

“Some businesses today consider location even more important than compensation in recruitment efforts,” said Rick Cleveland, a managing director at Cushman & Wakefield. “That’s driving a lot of the trend toward urban areas.”

That doesn’t mean that any old building on any city block will suffice for the worker of 2039. “The features that older-generation office spaces have, in terms of locations and amenities surrounding or in the facility, don’t work for the new-age tenant,” said Sicola, who points to companies in Manhattan that are abandoning Midtown for the west edge of the island and buildings that can be retrofit for open infrastructure. “For baby boomers, it was ‘live to work,’ but Gen Xers are working to live. They like to take breaks, have fun. Incorporating that into the workplace is critical.”

5. The much-reported death of the suburbs will prove to be greatly exaggerated.
As important as cities will be, however, suburbs won’t simply die. “The suburbs want to become more like urban centers. Millennials want to be there, but in an environment where they can combine their work-and-play lifestyles,” said Steven Blank, a former investment banker in real estate finance and now a senior fellow at the Urban Land Institute.

“Mixed-use projects take advantage of that,” he added. “We’ll see a lot of existing office complexes re-engineered to comprise transient components, rental, retail, office. One example right now is the Time Warner Center, albeit in Manhattan. One tower is the Mandarin Oriental hotel and office space; the second was built as the headquarters of Time Warner. And there’s a high-end shopping space, restaurants, condominiums. These are a wave of the future.”

Fedrizzi believes that suburbs will aim to replicate the city experience. “The way most of the suburbs will evolve is that there’s an interim step; they’ll be connected to cities by high speed or light rail, and they’ll become walkable communities with a sense of place.”

That will require a change in today’s “definition of building: newer and bigger. There will be a sense of going back to the past, to a place that’s a little more thoughtful,” Fedrizzi said.

6. Work spaces will be transformed by technology.
Call it the “Googlization” effect: Cleveland and Sicola expect office complexes of the future to look and function more like today’s technology company campuses, with open spaces, large workbenches mixed with more personal plug-and-go digital workstations and amenities like massages, bistros and dry-cleaning onsite.

Henry H. Chamberlain, president and COO of BOMA International, agreed. He foresees more densely populated office spaces as the globalization of business kills the traditional 9-to-5 workday and requires companies to be staffed 24/7. Key to their operation will be tech tools, such as teleconferencing, to stay connected to the international marketplace.

To accommodate the needs of the workplace, Chamberlain believes that these will operate as “smart buildings.” “Running a commercial office building will increasingly become a high-tech job,” he said. “It will require property managers and engineers to possess IT knowledge to keep buildings online.”

They will take on a whole new meaning, especially in the area of security. “Not only will technologies be integrated into buildings to track who enters or leaves the property, but access will be tailored to risk, tenant population and potential threats.”

7. Green buildings will come of age.
While sustainability is gaining traction in Europe, it remains more of a buzzword than an actuality here in the U.S.—but that’s changing. Efforts to meet environmental standards at this point tend to be costly, but they’re a long-term imperative, and most everyone in the industry recognizes it. “Sustainability is not economical,” said Cohen & Steers’ Bohjalian. “It’s a downward bias on return, but it’s the necessary evil.”

The gold standard in sustainable building design and operation is the U.S. Green Building Council’s LEED (Leadership in Energy and Environmental Design), levels of certification based on points earned in various credit categories, like water efficiency, indoor environmental quality, sustainable building materials and reduction in waste. “I tell people it’s like the nutritional information on a box of animal crackers,” said Fedrizzi.

There’s no doubt that all buildings 25 years from now will need to be up to LEED standards, he said, which will mean that many existing structures, especially some of the cheaply constructed ones of the ’80s, will have to be torn down. “Some you couldn’t retrofit if you wanted to.”

But LEED standards have always changed with the times, since their inception 14 years ago, and what constitutes a LEED-certified building—indeed, the future of all buildings, as Fedrizzi sees it—will be different in 2039 than it is now. “Instead of a nutrition label, the metaphor going forward is of a speedometer, measuring performance.”

The skyscraper of tomorrow will monitor how much energy-sapping CO² is in the air—perhaps via devices on employees’ wrists—and increase ventilation rates accordingly. The building will similarly monitor light, energy, water and heat levels and respond by controlling them, increasing efficiency as well as human and environmental health. (Fedrizzi imagines there will be a lot of agriculture on rooftops, as well.)

As a final word, warned Fedrizzi, don’t underestimate how much needs to be done to make our communities livable for the long haul: “Our schools are so decrepit, it will take $75 billion worth of upgrading to bring them up to code that the Environmental Protection Agency has already said is the baseline.”

Perhaps in 2039 our schools will be our most important—and sustainable—buildings of all.